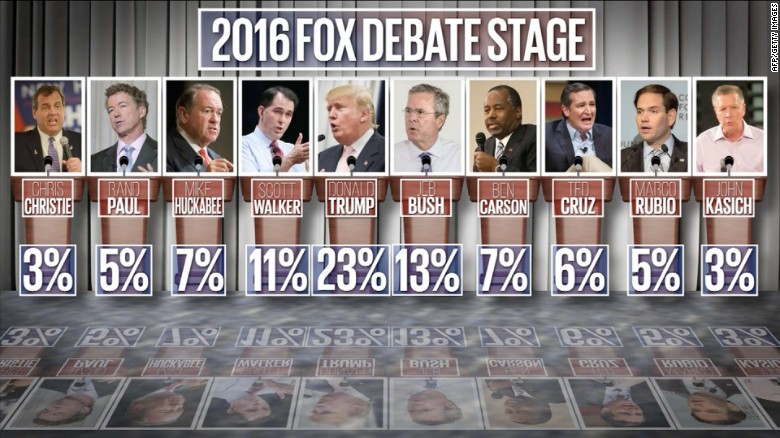 The three ‘fair and balanced’ Fox News   moderators played a key part of the debates, not only taking up 31% of the debate time but asking penetrating questions while holding candidates’ feet to the fire. This is what true journalistic debates   should be all about but rarely are these days.  The sharp questioning gives more credibility to the debates and can even bring more influence and impact, either positive, if the candidates can handle the tough questioning, or ‘bad’ if they can’t.  Tough questions like this are great, instead of the softball questioning  we’ve mostly seen  in recent years,  but , hopefully, it will go both  including the Democratic debates. #Fox, #GOPDebates, #Trump

There was a noticable lack of questions about ISIS, the economy, Benghazi , the Clinton cash and other HIllary Clinton issues, since Clinton is the front runner on the Democratic side.  There was plenty of back and forth criticizing Republican candidates but little about the Democratic side, this from a supposed  right-leaning network.

We wonder if Democratic-leaning sponsor Facebook -notice the big ‘F’ on the screen throughout the program?- had anything to do with the tougher questioning.  It certainly put the Republican candidates on the spot, but most seemed to handle the hardball questions with aplomb Hopefully, CNN and/or  MSNBC and/or other supposed ‘independent’ networks will take a lesson from this when it comes to the Democratic debates and  follow suit with tough questioning of Hillary Clinton, Bernie Sanders, et al ,   if and when those debates ever take place.

Whether the tough questioning helped bring about a record TV viewership for debates of 24 million people is hard to say but, with that many viewers of  both parties, the debates probably will have as much of an impact as anything in peoples’ decisions for whom to vote .

Despite the poll at top of page, we tend to go along with Pamela Geller’s opinion of winners Ted Cruz, Ben Carson , followed by Marco Rubio, with Carly Fiorina winning the first debate.

TRUMP BOMBAST  OR  TRULY DESERVING OF #1?

Despite what some would call ‘aggressive’ or even ‘mean-spirited,’  Donald Trump appeared to be the winner of the debates with people liking his  outspoken, non-politically-correct approach.  Whether his style will wear thin after a while should play out. Perhaps  other candidates were wise not to try to attack Trump, who is good at attacking back; one of the few who did, Rand Paul, came off , perhaps, a little weak and may have lost some ground by doing so.

And , for those who felt hat moderators Chris Wallace, Megan Kelly and Brett Baer were too hard on the candidates , especially on Donald Trump it was Trump who , according to NEW YORK TIMES and other media, was given more time than any other candidate. Not just Trump but all candidates came under tough questioning, perhaps Trump  slightly more   due to his more controversial nature and issues.

We will see whether Trump can maintain his lead in the polls .  Most other candidates didn’t hammer hard on Trump 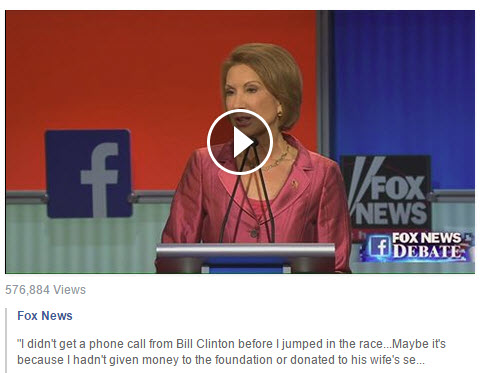 It’s surprising to us that Carly Fiorina wasn’t higher in the polling to make the second debate of the higher pollers.  Fiorina has a very smooth, honest delivery and answers questions succinctly with a bit of humor. She can jab without being mean-spirited as she was perhaps the only one to take on Democratic front-runner Hillary Clinton, helping the Republican cause as well as herself. Polls had Fiorina the only condidate from first debate with double figures with over 80% of the votes

Perhaps least ‘politically correct’ is Ted Cruz, yet, like Trump,  people seem to like his refreshing outspokenness, as he came in fifth in the ratings, just behind the calming Dr. Ben Carson, a 180 degree contrast to Trump.

Mainstream media seemed to make a big issue that Trump refused to close the door on a third party run if not selected by the Republican Party.  Of course, it could  be a big boon to the Democrats if that happened, ala Ross Perot in 2000 as Trump would likely take away a large block of votes from the Republican candidate.  However, this would be very unlikely, as Trump could not win as a third party candidate- nobody ever has – and this is more fodder for the left unless Trump truly is a loose cannon as some would like to claim.

For now, Trump has invigorated the political debates and probably added more to the conversation noted by the record viewership.

MURDOCH  CAVING  INTO  GOVERNMENT OVER HIS  INDICTMENT?

If  Facebook did have some influence, maybe of even greater influence goes to the top, and Fox owner Rupert Murdoch   and his legal  problems with democratic-leaning government.  Beware . 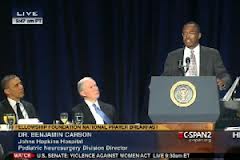 ‘The PC police are out’ said Dr. Ben Carson at keynote speaker of the prayer breakfast , attended by President Obama, as the noted pediatric neuro-surgeon went on to speak his mind, even if it went against ‘Obamacare’ and other of Obama policies.

Carson surprised many, especially Obama, not used to squirming as he gimace during the 27 minute address. Carson talked about growing up in poverty and how his mother tried to instill independence in her kids, showing them they had control of their own destiny. He spoke against the ‘entitlement’ society of today while Obama looked down, much like he did during his first Presidential debate in October.

‘We’ve dumbed things down. when people become less informed they become vulnerable,’ said Carson.  Carson talked about  turning off the TV and our real responsibilities.  He spoke about t his hero, Jesus, and how he used parables to put across his points.  He spoke about GOOD health care – ‘effecient’ and spending twice  as much on health care as any other country; he spoke about a living health certificate where people have control over their own health care, where people don’t go to the emergency room for a quick fix but to a clinic for all their problems.

Carson compared lawyers to policians. The ‘need to win‘  drives both, he said.   He  spoked sadly as how smart minority kids are looked down uponby their peers where as student athletes are praised and earn big money.   Carson started a scholarship program 16 years ago because of the problem.