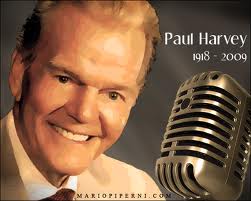 updated 9/24/12
There was none better than news commentator Paul Harvey as a watchdog for our nation. when he first saw things begin to deteriorate following the assasination of President Kennedy, he came out with the original version of ‘If I Were The Devil’ in 1964. Since then the audio has been updated as things have only got worse, with a final version from 2012, perhaps tweaked by Harvey’s son, Paul, Jr. Havey Sr passed several years ago at age 90. If these prophetic words don’t shock the country – or at least those people of old values who really care – then perhaps nothing will.

I would gain control of the most powerful nation in the world;

I would delude their minds into thinking that they had come from man’s
effort, instead of God’s blessings;

I would promote an attitude of loving things and using people, instead of
the other way around;

I would dupe entire states into relying on gambling for their state revenue;

I would convince people that character is not an issue when it comes to
leadership;

I would make it legal to take the life of unborn babies;

I would make it socially acceptable to take one’s own life, and invent
machines to make it convenient;

I would cheapen human life as much as possible so that life of animals are
valued more than human beings;

I would take God out of the schools, where even the mention of His name was
grounds for a lawsuit;

I would come up with drugs that sedate the mind and target the young, and I
would get sports heroes to advertise them;

I would get control of the media, so that every night I could pollute the
minds of every family member for my agenda;

I would attack then family, the backbone of any nation. I would make
divorce acceptable and easy, even fashionable. If the family crumbles, so
does the nation;

I would compel people to express their most depraved fantasies on canvas and
movies screens, and I would call it art;

I would convince the world that people are born homosexuals, and that their
lifestyles should be accepted and marveled;

I would convince the people that right and wrong are determined by a few who
call themselves authorities and refer to their agendas as politically
correct;

I would persuade people that the church is irrelevant and out of date, the
Bible is for the naive:

I would dull the minds of Christians, and make them believe that prayer is
not important, and that faithfulness and obedience are optional;

I GUESS I WOULD LEAVE THINGS PRETTY MUCH THE WAY THEY ARE!