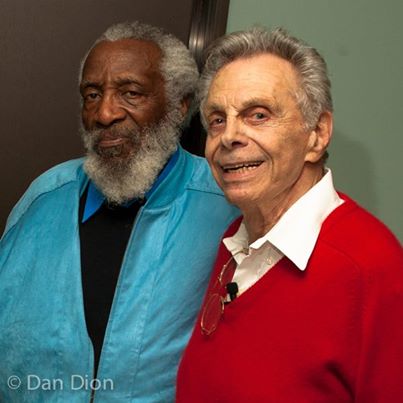 Two bigger than life poliltical comic legends, Dick Gregory and Mort Sahl, maybe not as big today and largely forgotten or unknown by most of America, yet still sharp as they entertain and educate. See Below

Another great show last night 4-26. Mort talked about getting pulled into the Garrison investigation of Kennedy assassination and his views on that – Kennedy was murdered by CIA and much more as Sahl moved from topic to topic in his rich personal real life history… The hour was much too short but glad to have that… Will be back next week for next chapter of the best kept entertainment secret. Mort Sahl, sharp as ever. The country’s loss is Bay Area’s gain! Funny to have the now right-leaning Sahl in liberal Mill Valley… but it works and he’s accepted here , if not changing a few political views…

The small gathering in the front lobby of the Throckmorton is quiet as ever so as not to miss a word from the erudite Sahl as he recounts episodes from his 60+ years during which he not only entertained as a comic but served Administrations, both democratic and conservative.  Sahl began as a liberal and hob-nobbed with the likes of JFK and Frank Sinatra now leans conservative yet will have a skewer out for whomever he feels may deserve one.  Sahl easily moves to current topics as he is as aware of current politics as he is of the past.  Sahl is often regarded as the first stand up comedian or at least the first to do political humor..If you’re in the San Franicso Bay Area don’t miss Sahl Thursday nights, 7 pm at the Throckmorton Theater.