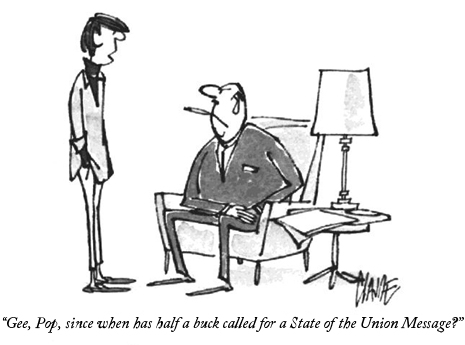 Will the Real STATE OF THE UNION Please Stand Up

‘Socialism is fine until you run out of other people’s money.’

Five years ago President Obama blamed then President Bush for ‘taking out a credit card and running up the debt.’  Of course, Obama  promised to lower the debt.  Instead of a credit card Obama just uses the good old Gutenberg  to print more money when he needs it – as he has RAISED the debt $6 trillion since Bush left office.  His promises ‘that things will get better ‘   are usually centered around 2015 or 1016 when he’ll be out of office or close to it.

Democratic House Leader Nancy Pelosi doesn’t think we have a spending problem but rather a budget problem.  (Nice turn of words, Nancy)  Giving you that, then, why is Obama administration the first one without a budget for an entire term? Nancy’s talking about her own.

Obama probably figures he can sneak in a few more ‘promises’ on his ‘low information’ followers before they  finally catch on just as he goes out of office…  In his State of Union speech we’ll probably also  see some more patented Obama  DEFLECTION  of the REAL current state, with Obama promising less guns and more entitlements for his flock.  Perhaps a little more energy promises, and Obama will remind us that his Obama care ‘will be fine’  but we must be patient for a few years  (until he goes out of office).

As usual, he’ll tell us how well things are in this country -(as long as he can continue to raise taxes) just as former Secretary Hillary Clinton praised her administration last week when she left office.   It may work for a little while more but   people like Dr Ben Carson are starting to say ‘enough already’  and the OPM will dry up.  But,  by then. Obama’s plan is probably to be out of office.  For now he may be able to get away with one more State of the Union speech fairly unscathed , though he better start watching his back with  new watchdogs  like Dr.   Carson, Senators Rand Paul and Marco Rubio coming on,  as they attempt to break through the Press Wall, exposing the REAL State of the Union – and it is NOT GOOD!

It will be interesting that the ‘other side’ will get TWO responses to Obama’s speech, one by Rubio and one by Paul.  This could be a good national platform for helping to expose the REAL State of the Union.