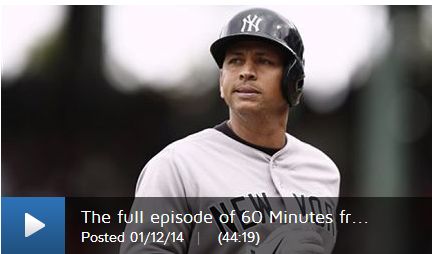 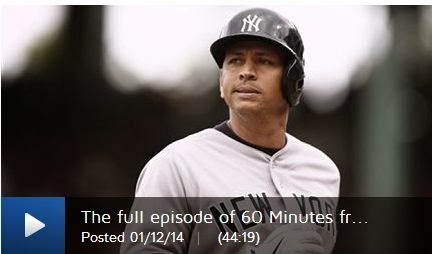 A-ROD FINALLY GETS HIS DAY

Alex Rodriguez never did get the trial he probably
deserved. So, his case went before TV’s 60 Minutes
Sunday night,  January 12.

Rodriguez has sued the Commissioner of baseball
calling his suspension of 211 games (later
reduced a still whopping 162) ‘a witch hunt.’


When Selig is questioned by 60 Minutes whether Rodriguez
is being ‘singled out’ Selig simply replies
that Rodriguez’actions were ‘beyond comprehension,’
without giving specifics.
Well, there certainly was no trial and
not a whole lot of justice as we could see it.


Now, mind you, we’re not defending Rodriguez purported
use of PEDs, by any means; in fact, we’re vehemently against
their use , which we feel has been the ruination of baseball today.

It is our belief that Commissioner Selig,
who appears to be  a very nice man, personally, never
was able to control performance enhancing
drugs in baseball. The problem has gone on
probably as long as Selig has been commissioner -almost
two decades-
and doesn’t seem to have improved, though
he tells us that  he is now proud to have
‘the strictest drug policy in all major sports.’


As far as singling people out, others, such
as Barry Bonds, have tried to obstruct justice.
In fact Bonds was even convicted in his court
case NOT for using steroids but for OBSTRUCTING JUSTICE.
Others like Rafael Palmeiro lied under oath
during the Mitchell Hearings.
As for Rodriguez, guilty or not guilty as he
may be of steroid use there were no court hearings
of which we know.  If the man wants to appeal
that group (Biogenesis) conviction, he should be
allowed a fair trial.


With the commissioner’s reign coming to an end
he no doubt wanted to finally put an end to
what has ruined baseball in the eyes of many,
including our own. He thought he could pick
on one man, Rodriguez, and scare off everyone else.
By so doing, Rodriguez has had to ratchet
up his case and say some of things that probably
should have been saved for the court room. What’s
had to come out in the media, instead, has probably
infuriated Selig, but it’s his own fault for the willy nilly
way he has handled PEDs in baseball.


Sure, there’s a good chance that Rodriquez
used steroids but just because he’s the ‘golden boy’
big name  of the 20 or so Florida lab cases, he shouldn’t\
have been singled out with a stiffer penalty
(players normally get 50 games for one PED
infraction and 100 for two).


Rodriguez, to our knowledge, has not been
personally convicted of PED usage. He was
just one of many whose name was turned over by the Biogenesis
lab in Florida, after its owner , Tony Bosch,
was ratted on by a disgruntled employee.
As Bosch feared for his life he came forward
to major league baseball.  There was no
court case for Bosch, either. He could be
lying for all we know.


Selig has approached the whole matter in
a very unscientific manner. As the lawyer we
believe him to be, he should know better,
innocence until proven guilty


And, as far as Selig being proud to have
the ‘best drug testing’ in baseball, there
wasn’t a single PED conviction at the major league
lever this past season, to our knowledge.
Don’t tell us , Mr Selig , that the problem
is cleaned up, that nobody is still using.
Your most recently updated drug policy
barely called for a single testing during
the regular season (2013) after testing
was only given during the preseason during
prior years – this after a decade and dozens
of PED convictions, including the Mitchell
report findings (At least the government
did a formal hearing, from which little
was done by MLB, thereafter, to change
things , to our knowledge. What would stop
players from continuing to use PEDs –
especially the new designer, now undetectable
ones –  when they knew they were
unlikely to be tested more than once
during the season-and normally with warning
(the latest testosterone drug can be out of
one’s system and undetectable within hours)?

A-Rod’s big problem now is that he has both the Commissioner’s office as well as his own player’s union against him.  The new head of the player’s union has been more cooperative with the commissioner than the previous one, so it may be quite an uphill battle for Rodriguez, but kudos for him for at least speaking out and pointing to the unfair treatment by Commissioner, guity or not of using PEDs.

The main reason we make an issue of
the Rodriguez-Selig case is that it brings
to a head what’s been going on for years,
mishandling of drugs in baseball to the
ruination of the game. Sure, some newer
fans, especially, have only grown up to
see baseball played one way, on steroids.
But many of us vintage fans remember when
the Golden Era of baseball when games were
played on a level playing field.  Living
in the Bay Area and having to see an otherwise mediocre San
Francisco Giants team, sans PEDS,
steal two World Series in three years
with THREE CONVICTED PLAYERS doing enough
on their own to put the Giants over the top has been difficult.
(At least we had a team across the Bay, in Oakland, with only
one KNOWN user.)
Pick One:

ALEX RODRIGUEZ  GETS HIS TRIAL ON TV’s 60 MINUTES