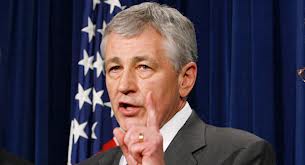 In past adminsistrations someone who performed so poorly as Chuck Hagel in his hearing to take over as Secretary of Defense, would be rejected for a cabinet post. Yet, now it’s as if everyone gets a pass. With the exception of Susan rice, who smartly dropped out of the running for Secretary of State it seems like every one of Obama’s nominees now gets a rubber stamp. Obama’s pick for secretary of defense, Chuck Hagel, is a proponent of selective strikes, including drone kills, to maintain America’s edge in the war on terrorism without risking major troop deployments. He showed little knowledge of the sequestration and hardly defended his anti-Israeli stands.

John Kerry, who has had a strong anti-defense position in the past – rather surprising for a Secretary of State  nominee –  must have appeared as ‘jewel’ in comarioon to Hagel as he slid right through the nomination process, which is hardly a process anymore. And, now we have a possible sexual allegation against yet a third  potential cabinet member.  Yet, espite this all three are expected to succeed the ‘nomination’ process. One begins to wondre why they have a nomination process at all. Only susan rice as failed to make it and that’s only because she withdrew.

And, by the way,  why is it that virtually every cabinet member from the first term has quit Obama, including Hillary Clinton, after saying how well she did and how much she will miss her ‘amazing team.’ There’s  always a few turnovers during two term Presidential administratoiins but to see basciall the entire Cabinet seemsr un-Presidented.

Thank goodness for a few like Lindsay Graham who are not afraid to confront the obvious,
ie that Hagel is an incompetent replacement- and other issues, like Obama’s role in
Benghazi. Now that HIllary has finally spoken on Benghazi, Graham promises to hold Obama, the last man
NOT to talk, to the fire…

The fact of the matter is that Obama and his authoritarian administration have put fear
in , primarily, his own Democratic constituents. Even on the Republican side, only the few
Grahams and McCains are willing to risk the wrath – including that of the media,
which has gotten so behind the Obama administration its a joke. Imagine iof George W
was in the same shoes as Obama and how the media would have excorigated him.

OBAMACARE – After the Fact

Now it comes out the obamacare, if we may call it that which is what most people
know it as, not only is causing layoffs around the country but will cost the average
family of five $20,000 a year – that’s $3,000 per person,
on average, or roughly $250 a month per person, which is more than many of us were/are paying
for their r own health insurance where they can ‘call their own shots,’ so to speak

Seems that Obama has no problem risking other lives in his desire to kill terrorist leaders, even without full provocation,  witness the Benghazi debacle ,nd the 23 Navy Seals who, quietly, lost their lives,e tc.